Too many bulls; not enough beef

Since fears about the survival of the Eurozone and potential recessionary impact on the world economy reached a height in September 2011, stock markets around the world have performed strongly. For example, the MSCI World Equity Index has risen by 50% in US Dollar terms. However, this global bull market has been almost entirely driven by rising valuations, rather than by earnings growth. Valuations of many equity markets are now back at the high levels seen in 2006-07 and, in the absence of earnings growth offer limited upside for stocks. We do, however, see scope for valuations to rise in Asia and Japan, and have most confidence in the earnings outlook of Japan and the UK – these markets are our preferred areas for equity investment. Conversely, the European and US markets are likely to underperform on a relative basis over the next few quarters.

The most commonly used valuation tool by investment analysts to analyse shares is the Price-Earnings ratio (“PE”) – the share price divided by the earnings per share (“EPS”) of the company. The lower the PE, the cheaper the share is considered to be. A share price is likely to rise if the company’s earnings grow, or if investors expect increased earnings quality in the future – this is reflected by the PE rising. Over the long term, EPS can be expected to rise in line with the growth in the global economy, while the PE tends to be mean-reverting around long term norms.

Since 30 September 2011, the point of greatest concern that a collapse of the Euro might trigger an even deeper world recession, the MSCI World index has risen in price by about 50% in US Dollar terms (about 40% in Sterling). The table below breaks this performance down between the change in forward EPS and the change in forward PE, across the different regions of the global equity market. 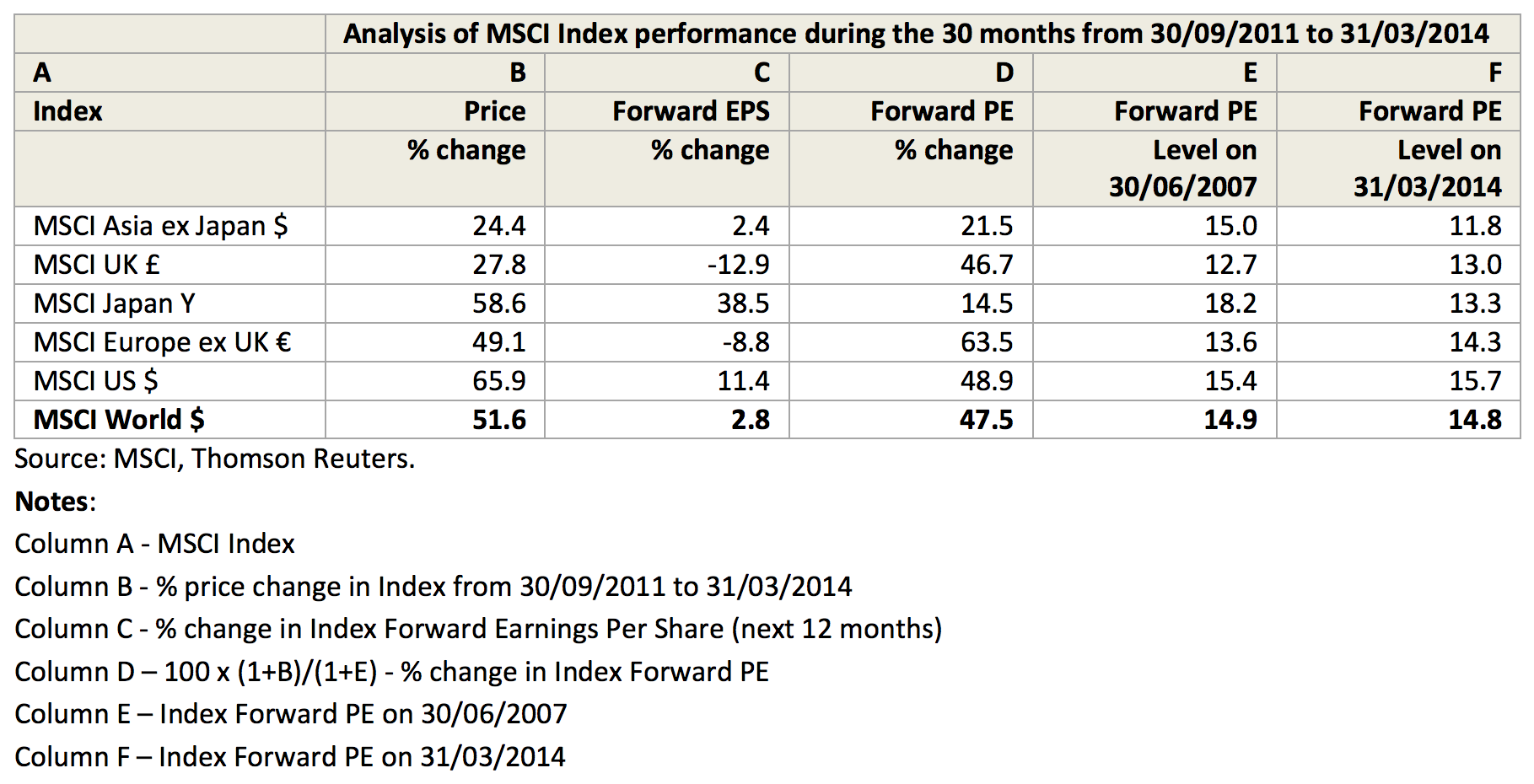 The table shows that the forward EPS (that is the forecast earnings over the next 12 months) of the MSCI World Index rose by only 2.8% over this 30 month period, but that there was a 47.5% gain in the PE, so the bulk of the gain in the index price was due to increasing valuation. This was most marked in Europe, where the PE expanded by 63.5% (though at the beginning of the period Europe was extremely cheap as it was at the height of the Eurozone crisis), and in the US, where the PE expanded by 48.9%. The Asian and Japanese markets, by contrast, have seen the least PE expansion.

Column F in the table above shows the current values (at the end of March 2014) of the Forward PE - the US and Europe have the highest valuations, while Asia, Japan and the UK have the lowest valuations. Comparing the forward PEs today (Column F) with their levels at the end of June 2007 (Column E), the valuation peak before the financial crisis and the last period of general market bullishness, suggests that valuations in both Japan and Asia are lower than those in 2007 and therefore still have scope to rise. However, the PEs for the US and Europe are higher than their 2007 peaks and appear to have little scope to increase further without moving into clearly over-valued levels. Thus earnings growth is now required if further sustainable gains in these stock markets are to be delivered.

Over the long term, equity markets rise with the growth of the economy and in particular with corporate profits. Earnings growth is the “beef” that markets require to move sustainably higher. Of the global equity market regions, the US has experienced the strongest economic growth over this period, corporate profit margins are at their highest ever levels and companies have been very aggressive in their use of share buybacks. Yet, even with all these positive factors, forecast earnings have only risen by 11.4% over the 30 month period.

We have the most confidence in the immediate earnings prospects for Japan and the UK, which is where we expect to find the beef. In Japan, the weakness of the Yen and the increasing likelihood of wage gains helping to increase consumer spending should continue to improve the corporate earnings outlook. In the UK, the domestic economic recovery is expected to boost the earnings of small and mid-sized companies. Meanwhile, large companies are very sensitive to the exchange rate and their earnings should see a significant boost if the recent spate of currency strength reverses.

Though we expect equity markets to deliver better returns than bond markets this year, we anticipate greater volatility than seen during the last two years. In the longer term, we remain convinced that Asian economies will deliver the greatest growth of all the regions and that this will feed through in EPS growth for Asian companies. Our model portfolios remain underweight equities in the US and Europe-ex-UK and overweight in Asia, Japan and the UK.