2016 has started with a re-run of the challenges from the summer of 2015, as the fall in Chinese share prices and the yuan have undermined confidence in financial markets. As before, clumsy actions by the authorities appear to have sparked the situation. This time, new rules designed to limit falls in Chinese share prices seem to have provoked faster selling; traders bailed out before daily downside limits were breached, de facto closing the market. The situation was exacerbated by the prospect of an end of a selling moratorium imposed on large shareholders in China. The Chinese authorities have now removed their recently introduced ‘circuit-breaker’ rules and reinstated the ban on substantial share sales.

Another similarity with last summer has been a revision of the Chinese foreign exchange regime. In August 2015, the yuan fell after the exchange rate setting methodology was changed, and another adjustment in December has again undermined the currency. Markets have become concerned that a weaker yuan will challenge other countries’ export competitiveness and lead to a damaging fall in inflation across the world.

Our view last summer was that events in China would not destabilise the world economy and that markets would recover; the FTSE World index duly rose 6.9% from its low in September 2015 to the year end. Our opinion was that economic momentum in the West was strong and measures would be taken to address the slowdown in China; subsequently, (i) the ongoing strength in the US economy led to an increase in US interest rates, (ii) indicators in other developed economies have continued to be encouraging and (iii) China cut its interest rates in August and October. We have similar expectations today and expect markets will recover. The main difference between the summer and now is the lower oil price, which has fallen a further 40%. While this will challenge manufacturers who supply capital equipment to the oil industry, it should boost consumer spending in countries which were already flourishing.

Our investment strategy for 2016 is based on our belief that the world economy is in a prolonged expansion phase, aided by central banks where necessary. While GDP forecasts have been revised down gently, the US, UK, EU and Japan are likely to have expanded faster in 2015 than in 2014 and should grow again in 2016; we expect steady growth will enable most companies to increase profits. While inflation may rise in 2016, the global economy is still growing without overheating to a point that would force central banks to use their brakes aggressively. We don’t expect a material increase in interest rates in the US or UK, rates in China will probably be cut further and are likely to remain low in Europe and Japan. While US and UK bond yields could rise, any increase should be modest, serving to constrain markets rather than destabilise them. Our favoured markets for company shares remain in Japan and Europe. Also, we have a preference for smaller company investments and we maintain our concerns about emerging market company shares. While we expect UK commercial real estate to continue to deliver competitive returns, the Central London market is showing signs of peaking, and our property recommendations are more likely to focus on funds which have a lower weighting in the capital.

One development likely to be new in 2016 is a focus on the possibility Britain votes to leave the EU (“Brexit”) in the forthcoming referendum. Our belief is that neither the UK Government nor the EU want to see Britain leave, so negotiations will continue until an agreement likely to appeal to the UK electorate is reached. However, the EU has a history of only reaching a compromise at the 11th hour, and therefore a crisis may be needed before an acceptable plan can be agreed. Unfortunately, the conclusion may not appear for a long time – the Conservative manifesto promised a referendum by the end of 2017. While many will be keen to resolve the matter in 2016 to avoid conflicts with (i) French and German elections in 2017, and (ii) the UK’s Presidency of the EU in the second half of 2017, this may be optimistic. It is possible businesses and markets will have to endure nearly two years of uncertainty, and many companies in the City of London could be adversely affected disproportionately by Brexit; this could be slightly negative for sterling and UK share price sentiment and we will bear this in mind when making investment recommendations. However, we currently believe the UK electorate is likely to vote to remain in the EU – the UK is usually an outward-looking nation, which seeks to engage with international bodies, supporting the status quo and taking the middle ground. Our view is that Brexit seems too radical, and it won’t happen, but we shall monitor developments closely.

Meanwhile, we will be keeping a close eye on interest rates, which have the potential to affect our investment strategy. First, there is the risk economies heat up, causing interest rates to rise faster than expected; this would make cash a competitive asset once more, and undermine stock and bond markets. The second risk is the opposite i.e. activity cools; with interest rates already low, investors would be concerned that governments have limited ammunition to use to reinvigorate their economies, an adverse scenario for share prices. However, just as the markets coped with the challenges from Greece, China and commodities in 2015, we do not expect difficulties in 2016 to cause a significant downturn in markets. Meanwhile, we continue to recommend appropriate portfolio diversification, with allocations to index-linked gilts and UK commercial real estate to protect portfolios against unexpected market surprises on the downside.

Many company share markets reached new highs in the first half of 2015, but declined in the second half as developments in China and commodity markets undermined confidence. A large number of market indices ended 2015 close to their levels at the start of the year, with most of the annual total return from individual markets accounted for by dividend income. With bond yields broadly unchanged over the year, and bond market returns flat, the only major asset class to have generated a double digit return in the past year was UK commercial real estate. The table below shows the total returns for 2015, as at 31 December (apart from the IPD Property index, which is for the eleven months to 30 November 2015). 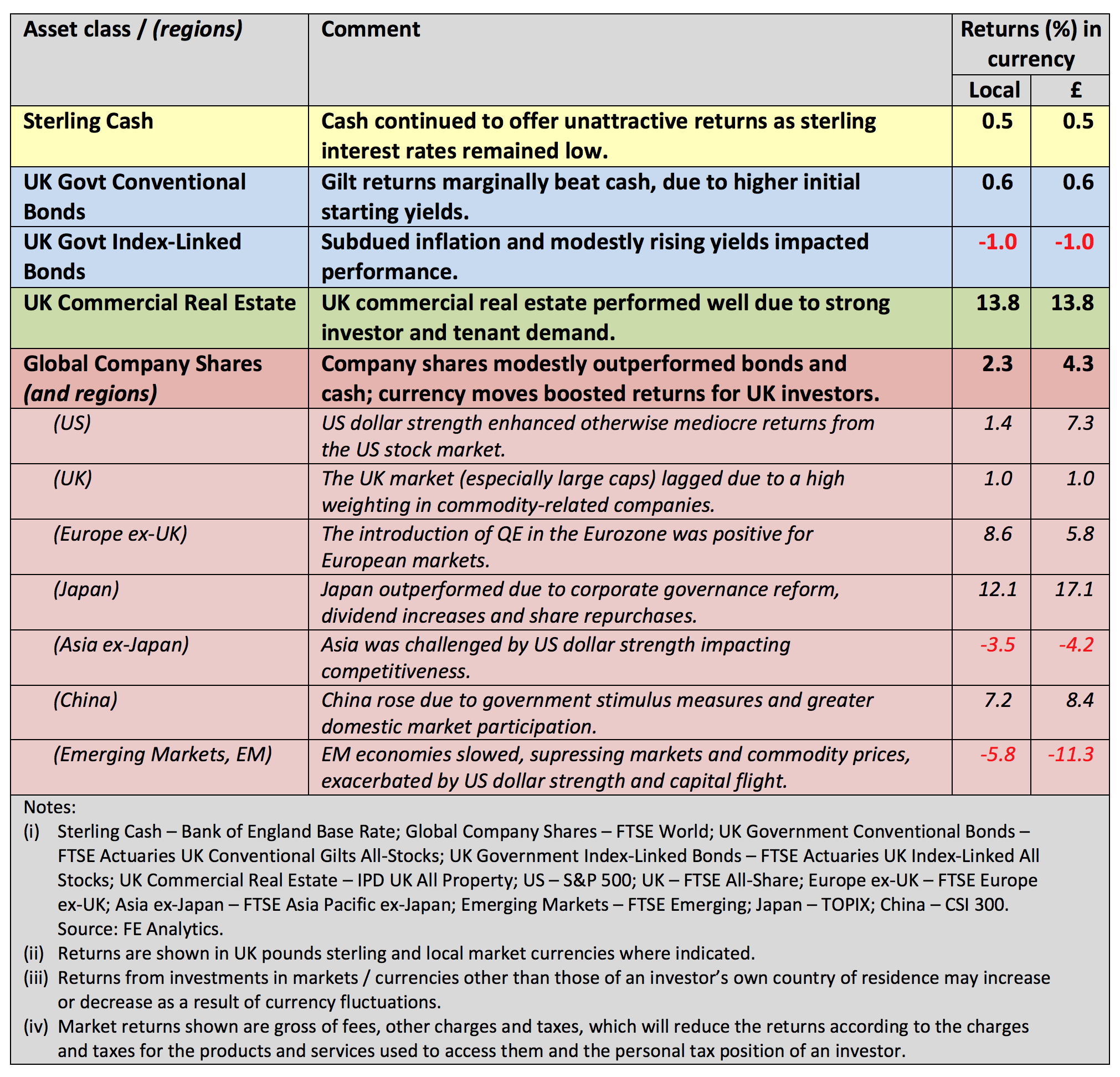 There were no major changes to our strategy during the course of 2015; our recommended allocations to company shares, bonds and real estate were unchanged. We retained our heavy allocations to the Japanese stock market and UK commercial real estate, and continued to avoid emerging markets company shares, which declined. We did, however, adjust regional stock market allocations by, for example, proposing increased allocations to Europe, as the economic recovery developed. We also recommended increased investment in smaller company and private equity funds, two areas which we expect to continue to deliver superior long term performance; these changes were funded by lower allocations in the UK and Asia. Finally, we implemented a switch from currency hedged to unhedged units in Japan, as we believed the yen was more likely to strengthen than weaken. These allocations have largely been profitable for clients.